A Zi Wei Reading For Princess Charles
by joseph Yu


The following reading is for a male born Nov. 14, 1948 at 9.14 p.m. adjusted local time. The reading does not tell us that the person is born in the Royal family. In fact, there can be quite a number of people with the same birth data. The reading is done as if nothing more than the birth data is known. I must emphasize that there is no such thing as destiny. No one is destined to be the King, the President or a murderer, a crook, merely because he is born on such and such a date and time. Nothing then is referred to Prince Charles' background. There will not be any prediction of his becoming the King of England or not. The answer is quite obvious as the reading for his future is highly suggestive. It is interesting to ignore his background as if the astrologer knows nothing about him. This gives a good answer to the frequently asked question :

Are the lives of two persons born on the same day at the same time identical from an astrological point of view?

Life Palace : The Gloomy Star is the major star in this palace. If this star is accompanied by either the Abundance Star or the Transformed Star of Prosperity in this or a related palace, then it is known as "Jade hidden in a Rock". The person will then have high achievements like a jade cut from a rock and refined to become a precious ornament. Neither star is found in this chart. The combination of the Gloomy Star, the Sun, the Mercy Star, the Lucky and Blessing Stars (transferred from the opposite house) being accompanied by Misfortune, Worrisome, Troublesome, Stern and the fact that the Mercy Star has transformed into Annoyance is not a good combination at all. This is the life of a very ordinary person with little achievement of his own. The best way to live such a life is to enjoy whatever his parents give him and do not try to do anything spectacular, voluntarily or involuntarily.

Parents Palace : The fortunate stars cluster in this palace and the related palaces. He comes from a wealthy family and probably a noble family. This is because of the special combination of Angel I in this palace and Angel II in the opposite palace. The combination of the Minister Star, the Emperor Star, the Ruinous Star, the Treasury Star, together with Angel I & II, Deputy I & II, the Star of Abundance, Fiery, Siren and Birth is a very strong combination. He must have rich and famous parents. Judging by this house he should live a happy life as long as he does nothing to hurt his family.

Wealth Palace : There is not a single star in this palace. The Lucky Star and Blessing Star are transferred from the opposite palace. He has a good income and will be able to inherit a huge asset from his parents.

Career Palace : The Sun is in a very good position in this palace. It is suitable for him to be involved in charity work. He can gain recognition in this way.

Travel Palace : The Mercy Star transforming into Annoyance together with the Troublesome Star and the Stern Star severely affects his public image. He is simply not liked by people even if he does nothing wrong. He should stay home and avoid unnecessary exposure.

Marriage Palace : Since this is also his Body Palace marriage to him is of utmost importance. The Moon transforming into Authority indicates that he has a beautiful and glamorous wife. She is capable of establishing a good career and be the head of a large organization. Since the Star of Romance is also in this palace, he will have a soul-mate and this leads to disaster. The Star of Calamity is most detrimental to marriage and relationship. The combination of Mercy transforming to Annoyance, the Lucky and Blessing Stars, the Sun and the evil Worrisome and Troublesome Stars simply points to a sad ending.

Strengths : The best palace in his star chart is the Parents Palace. Being born with a silver spoon in his mouth he does not have to struggle for survival. He will live under the shadow of his parents. Whether this is a happy life only he can tell. His Properties Palace is also a strong palace. This indicates that his properties inherited from his parents has a strong foundation and will prosper under good hands. Another good palace is the Children Palace. The Treasury Star together with the Star of Abundance and other good stars in the related Palaces indicate that he will have good children to keep his family business in good shape.

Weaknesses : The worst palace in his star chart is the Travel Palace. He is not welcomed wherever he goes and he gives people the impression of snobbishness and lack of earnestness.

The Life Palace for this ten year cycle is at (3,5) where the Sun is accompanied by two Worrisome Stars. He is bothered and feel unhappy in these ten years. Where is the origin of his worries?

The worst house is the Marriage Palace. When the Lucky Star and the Blessing Star are in this house, separation or even divorce is highly probable. The Lucky Star has transformed into Prosperity indicating he has a relationship and is deeply in love. The Blessing Star does not like to reside in the same palace as a Prosperity Star because it brings problems. If they are in the Wealth Palace it indicates unjustified wealth bringing problems. If they are in the Marriage Palace it indicates that there is an extramarital affair causing problems.

Since the Career Palace is an empty palace, the same two stars in the Marriage Palace are transferred over. These stars affect his career as a result of the outcomes of his disastrous marriage. He will have problems with his career.

The Star of Misfortune in the Wealth Palace indicates a sudden loss of a huge amount of wealth.

There is another palace that is also in trouble. This is the Health Palace. The Wicked Star has transformed into Annoyance . He may encounter an accident. The Intellect Star being transformed into Fame will minimize the danger.

The Life Palace for this ten year cycles at (4,6) where the Abundance Star meets with the Prosperity Star in the opposite palace. He will gain a much better image in the public eyes. He will also travel a lot and gain popularity. However, the Worrisome Star gets into this palace and his wishes are being delayed to come true.

His Marriage Palace has the Finance Star and the Power Star with Intelligence and Wedding. He will have to fight hard for a marriage. However, the Moon in his original Marriage Palace transforms into Prosperity indicating that a wedding is most likely.

His career is improving too. The combination of stars in his Career Palace is impressive. He can be the head of a large organization. The Lucky Star and Blessing Star are transferred into the Properties Palace. This indicates that he inherits his enterprise from his wealthy parents.

Now you can probably guess what is going to happen to Prince Charles in the days to come. 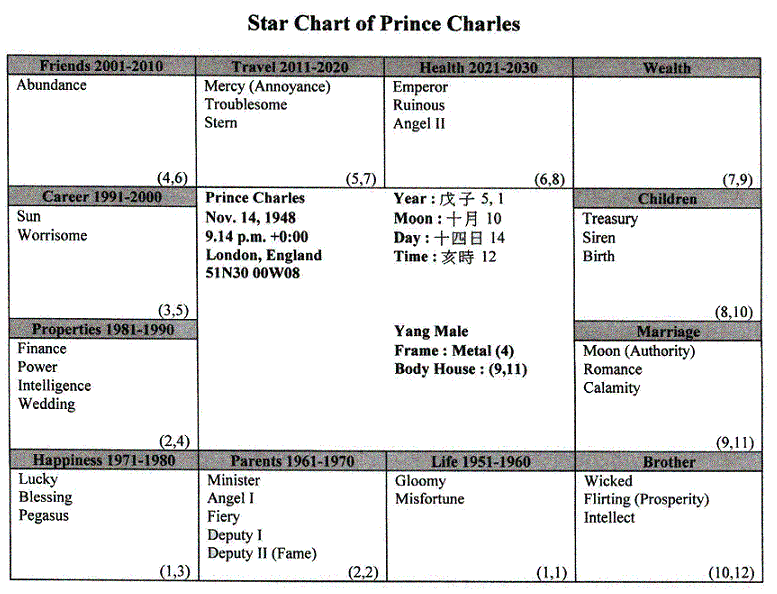 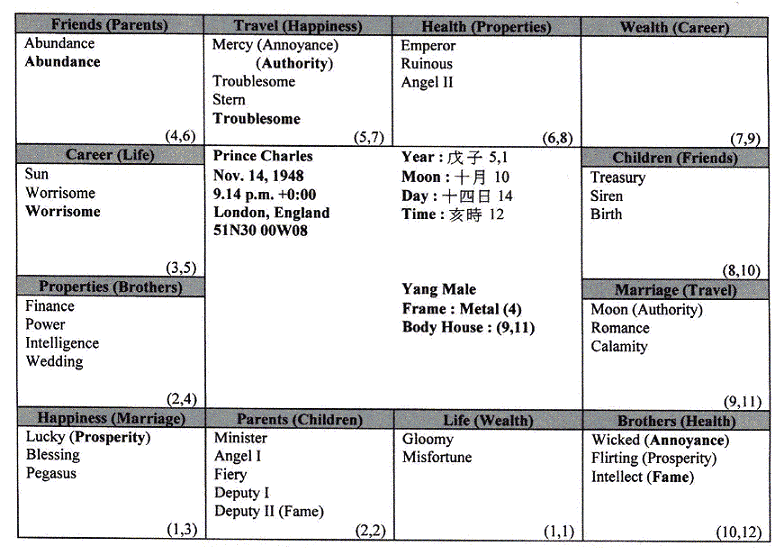 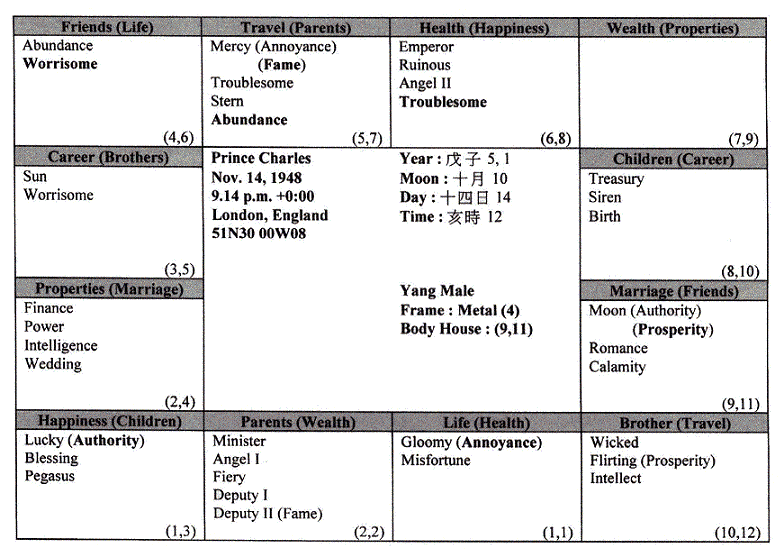